InSilicoSeq is software that simulates Illumina reads from genomes, and was especially built to simulate reads from metagenomes. InSilicoSeq is written in Python, is fairly well-documented, and easily installed via Python’s package manager pip(3).

With so many bioinformatics tools currently available to users, simulated datasets are ideal for quickly generating toy datasets based on real data to test new tools for general usability and user task suitability. For example, a researcher could test a variant calling pipeline on data simulated from the human genome. If the data simulation did not introduce new mutations relative to the original human genome used for simulation, variants should not be detected. Simulated datasets are also useful for teaching, since they can be readily shared unlike protected (human) data.

In this tutorial you will run InSilicoSeq on a 64 bit Ubuntu Server 20.04 LTS (HVM), SSD Volume Type instance. Instructions on how to launch an AWS instance and access it are described in our AWS tutorial. Please follow those instructions with a few modifications:

You must select the the t2.xlarge instance (instead of the default t2.micro instance selection described in the tutorial):

t2.xlarge machine is not part of AWS's free tier. Running this instance costs money to all users, including those who have free tier access. Check the estimated cost section at the top of this page.

After choosing t2.xlarge, click on the "4. Add Storage" tab on the instance launch page and then change the "Size (GB)" tab to read "16", as shown in the image below:

You need to add more storage because, while the output fastq files themselves are small (<20MB), temporary files generated during the simulation take up a lot of space.

Then go back to the AWS tutorial and follow instructions on how to access the instance via the MacOS terminal window.

InSilicoSeq can be installed using Python's package manager pip3. However, AWS's Ubuntu 20.04 instance does not come pre-installed with pip3. Let's begin by updating the instance and installing pip3.

Now you can install InSilicoSeq:

For the Ubuntu machine to recognize the InSilicoSeq executable, we need to add the bin (where InSilicoSeq was downloaded) to Ubuntu's search path.

Now your Ubuntu machine should be able to find InSilicoSeq. You can check to see if it was properly installed like this:

If you see the version number printed on the screen, you are good to go!

The human genome should be 3.1 Gb when uncompressed. You can check its size using the ls -th command.

Make a directory called "fastq" in which the simulated fastq files can be saved.

Finally, run the code to make your simulated fastq file.

What are all these flags?

--model lets you input an error model file. The default is None. You're using hiseq for a pre-computed error model suitable for simulating data generated from a HiSeq sequencing run. Other available options are NovaSeq and MiSeq. If you do not wish to use a model, use –mode basic. The names of the built-in models are case insensitive.

--n_reads specifies the number of reads to be simulated. The default is 1 million (1M).

--cpus specifies the number of CPUs that should be used. Default is 2.

--output specifies the name of the output files. You're calling it my_sim, but you can change it to whatever suits your needs.

If your run is successful, you will see two ".fastq" files: "my_sim_R1.fastq" and "my_sim_R2.fastq", and an abundance file called "my_sim_abundance.txt". The abundance file is more meaningful in the context of simulating metagenomic data. It is a tab-delimited file containing the abundance of each genome supplied to the command. The 5 M reads generated per simulation are split between the R1 and R2 files.

If you want to repeat the simulation multiple times, modify the following code block by changing the n to an integer corresponding to the number of times you wish to run the simulation. Your output files will be named

Depending on how many times you run the simulation and/or how many reads you simulate, the code may take a really long time to complete! You can start out by running a small set of reads (--n_reads 1M) to test the code before scaling up.

With real data, one must always perform quality control to ensure that the raw data looks good. With simulated data, you can do some simple quality control to make sure nothing went terribly wrong with the simulation itself and that you have the desired read length.

Let's use FastQC to generate a quality control report.

To install FastQC run this code:

You are using the * wildcard to help specify all of the .fastq files here.

The easiest way to visualize the output is to transfer it to your local computer. First, let's list all the files and pull out the report summaries (.html) using ls:

Now you can move the ".html" files to your local computer to visualize:

This code block must be run on your local terminal window and not on the AWS terminal. You can start a new terminal by typing cmd+N

Here is an image of the top of an example FastQC report.

This YouTube video made by the Babraham Bioinformatics Institute (the developers of FastQC) on how to interpret FastQC results has more information on interpreting FastQC results: 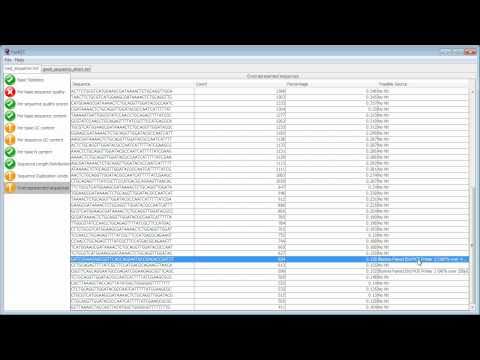 From the FastQC report, we see that the overall read quality scores are good and read length is 126bp. These simulated reads are now ready to be used for analysis!

You can also check out our tutorial on transferring files from AWS to Cavatica.